The Origin of Sweetgrass Baskets

Sweetgrass baskets are almost identical in style to the shukublay baskets of Sierra Leone, where learning to coil baskets "so tightly they could hold water" was an important rite of passage in West African tribes like the Mende and the Temne.

This basket-making tradition came to South Carolina in the 17th century by way of West African slaves who were brought to America to work on plantations. West Africa resembles South Carolina in both climate and landscape, and rice had long been cultivated there. In slaves, plantation owners gained not only free labor but also a wealth of knowledge and skill.

One such skill was basketry. Using a type of marsh grass known as bulrush, slaves coiled sturdy, intricate work baskets called fanners. Fanners were used for winnowing, the process of tossing hulls into the air to separate the chaff from the rice. Other work baskets held vegetables, shellfish, and later, cotton. 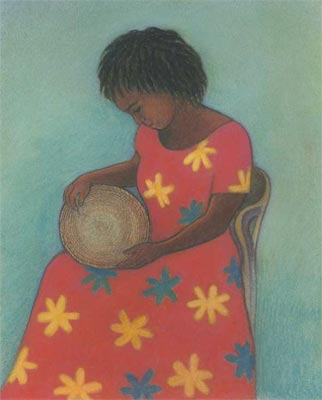 Sweetgrass Baskets Materials – Then and Now

It is interesting to note that early baskets were made not from sweetgrass but from bulrush, a tough plant well-suited for heavy plantation use. Further, Bulrush – or russia as it sometimes called – isn't botanically a bulrush at all. It is actually a needle rush (Juncus roemareanus). Many Lowcountry residents will recognize this as the tall, dark marsh grass that grows alongside our green Spartina. It is a native plant that takes root in mud of a slightly higher elevation. According to local botanist Karl Ohlandt, sometimes the difference in elevation can be as little as an inch or two.

In fact, it wasn't until the early 1900s that artists began to employ other plant materials, including pine needles, saw palmetto fronds, and, most notably, sweetgrass. This important addition allowed for greater flexibility, which in turn allowed for more sophisticated designs like loops. Other assets of sweetgrass are its pretty, pale green color and its pleasant scent, which many compare to the smell of fresh hay.

Sweetgrass (Muhlenbergia filipes) grows in the moist, sandy soils near oceans and marshes. Although nondescript much of the year, you can easily recognize it by its vibrant purple plumes in the fall, which eventually fade to white. It's harvested in the spring and summer by "pullers" who slip it from its roots and place it in the sun to dry. 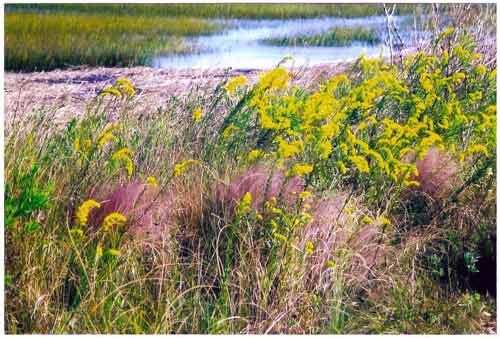 One thing that makes sweetgrass baskets special is that they aren't made with typical weaving techniques like plaiting or twisting, which are common in other parts of the world. Instead, Gullah artists employ the West African tradition of coiling. Dried sweetgrass is bundled together and coiled in circles. Thin strands of palmetto fronds hold the piece in place, and bulrush and pine needles are then added for decoration and strength.

To create these intricate artworks, basketmakers use either a "sewing bone" or a "nailbone." Sewing bones are sharpened metal spoons, and nailbones are little metal picks made by flattening nails or whittling the rib bones of a cow or pig.

Sweetgrass Baskets and the Sexes

Interestingly, although sweetgrass baskets are now made mostly by women, male slaves usually made these large baskets for the field. Female slaves focused on the functional baskets of the home, which they used in their cabins for storage and food. Baskets were often coiled by older slaves who were no longer able to work in the hot sun; plantation owners then sold the baskets for extra income.

After Emancipation, the Penn Center on St Helena Island near Beaufort began to teach industrial skills to newly freed blacks. Even then, basketmaking was taught to men – not women. (See a photograph of the men at work.)

Where to Find Sweetgrass Baskets Today

Basketmaking was once common along the coast from southern North Carolina to northern Florida, anywhere slaves worked and grew rice. Today, the craft is primarily concentrated in South Carolina's Lowcountry, especially in downtown Charleston and Mount Pleasant. 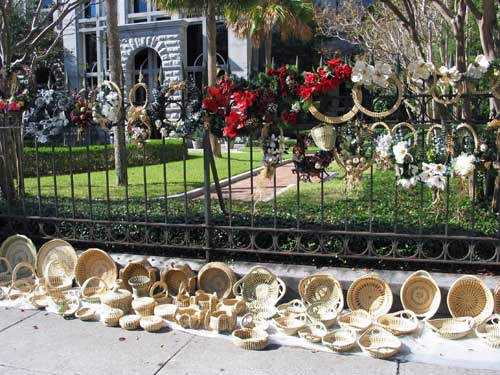 In Charleston, simply go to the Four Corners of Law at the intersection of Broad and Meeting streets. There, you will find basketmakers creating and selling their crafts along the sidewalk. You will also find Gullah women making sweetgrass baskets in the city market area between Meeting and East Bay streets.

Mount Pleasant basket stands can be found alongside US 17. The Hamlin community – a community of families who are descendants of slaves from area plantations – have stands along the "Seven-Mile" stretch known as the "Sweetgrass Basket Makers Highway."

Although sweetgrass baskets have been a part of Lowcountry culture for more than 300 years, the future of the art is uncertain. Today, it faces four main threats: