Thanks to a fifth-grade class from Ninety-Six in Greenwood County, the Loggerhead Sea Turtle – Caretta caretta – became South Carolina's state reptile in 1988. While loggerheads are considered the most common species of saltwater turtle in the United States, their numbers are dwindling and they have been on the threatened species list since the late 1970s.

Named for their large, log-shaped heads, loggerhead turtles have a reddish-brown shell, or carapace. They eat mainly jellyfish and crabs, but have also been known to eat fish and even seaweed. Loggerheads are the largest species of hard-shelled turtle, with males weighing 250 pounds on average. 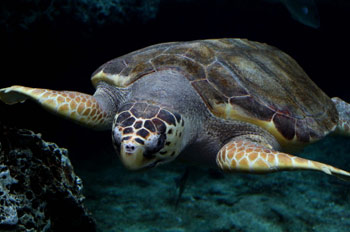 SC's State Reptile – Loggerhead Turtle
Female loggerheads can mysteriously find their way back to the same beach on which they were hatched in order to lay their eggs. Once they reach their destination – often hundreds of miles away – they make their way ashore late at night and dig a large hole in which they deposit as many as 125 eggs. 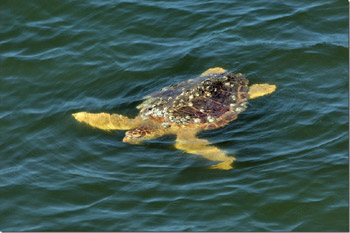 Loggerhead Turtle © Larry Gleason, 2012
Nests are made during the mid-to-late summer and are primarily found along the Florida, South Carolina, Georgia, and North Carolina coasts. Depending on the temperature, incubation in South Carolina lasts between 53 and 68 days.

Once a female has laid her eggs, she covers the nest with sand and returns to the ocean, leaving her brood to hatch on its own. Hatchlings, or baby loggerhead turtles, climb out of their nests and make their way towards the ocean. (This process is sometimes called "boiling" as the little turtles emerging from the sand resemble an overflowing pot.) They must climb over beach debris, swim through the surf, and make it far out to sea before they are able to find food and safety from predators.

Sadly, only a handful of young turtles survive into adulthood. Because they rely on the moon's reflection to lead them to the sea, they are often confused by man-made lights coming from beachfront homes and street lamps, which lead them in the opposite direction of the ocean. Many communities have instituted "lights-out programs" to help combat this problem.

Hatchlings are thought to remain in oceanic streams near the water's surface for several years, where they feed on floating vegetation and small prey in order to grow. Often referred to as the "lost years," scientists are still unsure of their habits and whereabouts during this time.

Juveniles, between the ages of seven and 12, move to coastal areas where they can more easily forage for hard-shelled meals such as whelks and conch. While loggerheads are thought to live 50 years or more, males never leave the ocean and females do so only to nest.

Besides artificial lights and predators, there are many other threats to loggerhead turtles, such as land development, commercial fishing and shrimping, poaching, beach vitex and offshore oil drilling. Numerous groups have been formed to help protect and preserve this amazing reptile. 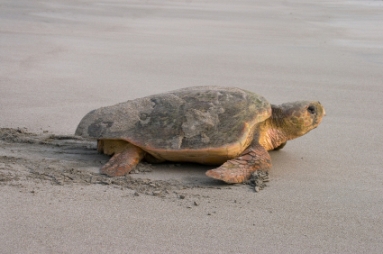 Loggerhead Turtle Comes Ashore to Lay Her Eggs
Much of the information for this article came from the following resources:
National Geographic | Turtles.org | Glossary of Turtle Terms