The Wild Turkey, or Meleagris gallopavo, is one of only two birds native to North America to have been domesticated (the other is the Muscovy Duck). There are only two species of turkey in the world; however there are numerous subspecies, or variations, of each. Adult Wild Turkeys have between 5,000 and 6,000 feathers, but there are numerous differences between males (often called gobblers or "toms") and females (known as hens). 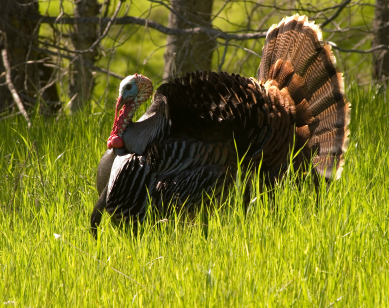 In 1784, Benjamin Franklin criticized the choice of the Bald Eagle as our national bird. He felt that the Wild Turkey would have been a much more respectable and representative emblem for our nation.

"For my own part I wish the Bald Eagle had not been chosen the Representative of our Country. He is a Bird of bad moral character. He does not get his Living honestly. You may have seen him perched on some dead Tree near the River, where, too lazy to fish for himself, he watches the Labour of the Fishing Hawk; and when that diligent Bird has at length taken a Fish, and is bearing it to his Nest for the Support of his Mate and young Ones, the Bald Eagle pursues him and takes it from him.

With all this Injustice, he is never in good Case but like those among Men who live by Sharping & Robbing he is generally poor and often very lousy. Besides he is a rank Coward. .... The Turkey is in Comparison a much more respectable Bird, and ... a true original Native of America ... He is besides, though a little vain & silly, a Bird of Courage, and would not hesitate to attack a Grenadier of the British Guards who should presume to invade his Farm Yard with a red Coat on."

A male Wild Turkey generally has a "beard" – a tuft of feathers sticking out from his chest. A hen will sometimes have this feature too, but it is shorter than that of a male. While adult females tend to weigh between seven and 12 pounds, adult males are much larger and weigh between 11 and 24 pounds. The National Wildlife Turkey Federation, located in Edgefield, once documented a male who weighed a record 38 pounds! 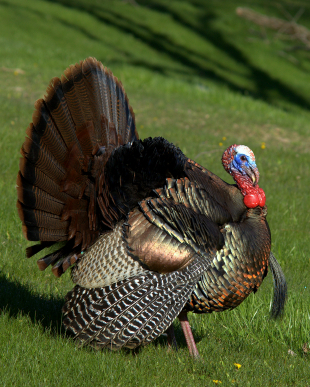 Wild Turkey with Plumage Spread
Unlike more common domesticated birds, such as chickens, Wild Turkeys are very good fliers. Though they fly relatively close to the ground and only for short distances, they can reach speeds of up to 50 miles per hour! They also have great eyesight. While about 80% of their diet is made up of grass, their keen vision helps them find hidden nuts and berries, insects, small frogs, and snakes. Wild Turkeys are also known to be very intelligent, which helps them quickly learn the tricks of their prey.

Males often mate with multiple hens. Each male establishes a territory in which to find a partner. When he finds a female, he spreads his tail, puffs his feathers, and drags the tips of his wings on the ground. This is referred to as the strut. Males also use their "gobble" to attract a mate, which can be heard for up to a mile!

Hens make their nests on the ground, surrounded by thick vegetation to hide them from predators. They lay 10 to 14 eggs per nest, usually laying one egg per day. The eggs must incubate for at least four weeks before hatching, but once they do, the babies – or "poults" – leave the nest within a day. Though these youngsters stay close to their mothers – often for several weeks or even months – they learn to feed themselves within a matter of days. 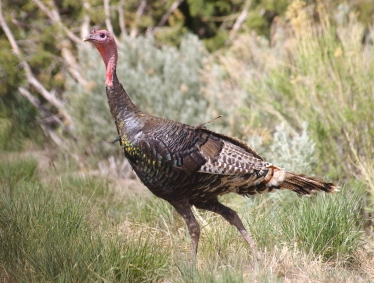 Wild Turkey Walking in the Grass

Turkeys are social animals. Hens and their broods form groups of up to thirty, and may grow to include as many as 200 individuals during winter months when food is more scarce. There are numerous predators of Wild Turkeys, including raccoons, skunks, foxes, snakes, and owls. Humans, however, remain the greatest predator of all.

Wild Turkeys began to disappear in the early part of the 20th century due to over-hunting. Stricter hunting guidelines along with rehabilitation efforts have allowed their numbers to increase steadily over the past 100 years. It is estimated that more than seven million Wild Turkeys now live in 49 of the 50 states, giving it unquestionable national presence.

The resurgence of the Wild Turkey population is due in part to the formation of the National Wild Turkey Federation – headquartered in our very own Edgefield County. Founded in 1973, this non-profit organization has grown to include a half-million members across the US, Canada, and Mexico. Staff, volunteers, and sponsors form partnerships with other wildlife conservation organizations to allocate land for hunting and for wildlife preservation. 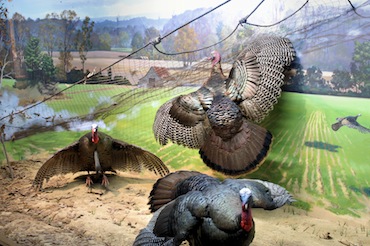