Square dancing was designated the offical folk dance of South Carolina in 1994 by Act 329 of the General Assembly. Traditional square dance, also called "old time square dance," has long been enjoyed by folks of all ages as a wholesome form of family entertainment.

Sixteenth and seventeenth-century settlers came to America from across Western Europe. Each family brought with it the customs and heritage of their homeland which, when combined with those of their neighbors, evolved into uniquely American traditions. Friends and family gathered in homes, barns, or town halls to play music and dance their native steps. Eventually, French quadrilles, Irish jigs, and English reels were interwoven and the square dance was born. 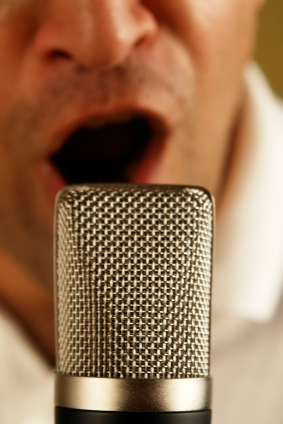 Square Dance caller
Square dancing was made even more characteristically American by the advent of the "caller." The caller is a person who stands before the dancers and calls, cues, or prompts their steps. As the square dance evolved and its number of steps increased, the necessity of a caller became much more important.

Calling a square dance can be very complex, as most calls require between four and 32 "counts," or steps. Frustrated by the rapid influx of new steps and calls, a committee was formed to develop a list of standards. The Gold Ribbon Committee compiled an index of 50 steps every good square dancer should know, but it soon became evident that the list would need to be expanded to 75. In 1974, an organization aptly named CALLERLAB, formed to keep track of just such changes. This was just the thing square dance enthusiasts needed to bring about order on the floor. 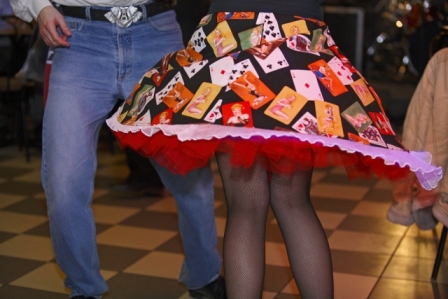 Couple Square Dancing
Some confusion exists surrounding the differences between square, round, and clog dancing. In fact, many folks use these terms interchangeably, but there are distinct differences between the three. Square dancing is most often done by couples in groups of two or four, but can include many more participants. Dances begin and end with each set of couples returning to a square formation. Round dancing can refer to cued ballroom dances, or to circular chain dances where dancers connect in various ways, such as hand-in-hand, hand to shoulder, and so forth. While round dancing is often "called" and referred to as a folk or country dance, the steps are danced "in a round."

Clogging is another social dance that gained immense popularity in the Appalachian Mountains during the early 18th century. It, too can be called and is most often danced to the familiar sound of fiddles and banjos. However, as the precursor to tap dancing, clogging utilizes "flats" or taps affixed to the bottom of the shoe to produce complex rhythms.

Over centuries other forms of dance took hold and the square dance began to fall from favor. During the early 1930s Henry Ford helped jump-start square dance popularity as part of his New England restoration project. People thought perhaps it was a fad that would soon be replaced, but even as banjos and fiddlers made way for record players, square dancing persevered.