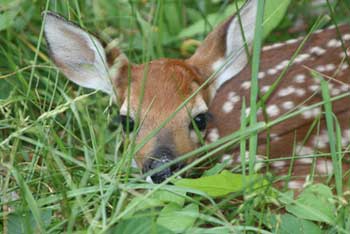 Both the female (called a doe) and the male (called a buck) have white tails and necks, but for much of the year males can be distinguished by the presence of antlers. Young deer, called fawns, have white spots for the first few months, then take on the typical reddish-brown coloration of adults. When startled, the deer will often raise their tails in the air to show the white underside, which can serve as an alarm signal to other deer. This is also known as "flagging," and makes it easier for fawns to follow their mother if she senses danger. 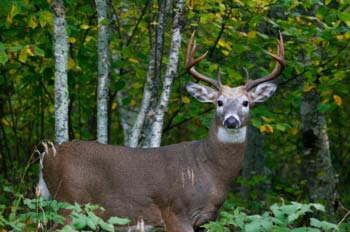 White-tailed Deer are often observed leaping over fences with ease – they are capable of running quite fast and are also good swimmers. White-tailed deer are herbivores, meaning they eat only plants. They adapt to their surrounding vegetation which varies based on season and the area they live in. Fawns are dependent on their mothers for the first few weeks and will lay hidden in brush while she forages.

More about the White-tailed Deer