The Spotted Salamander was named the official state amphibian in 1999, following a year-long campaign by the third-grade class of Woodland Heights Elementary School in Spartanburg. The species itself was first described and documented by Oxford University botanist and zoologist George Shaw in 1802.

The Latin name, Ambystoma maculatum, denotes a species commonly known as mole-salamanders. The reason for this is that Spotted Salamanders live in hollow, underground spaces much like moles and rarely emerge for more than a few moments at a time. They also prefer wet woodland areas close to pooling water where they can lay their eggs. 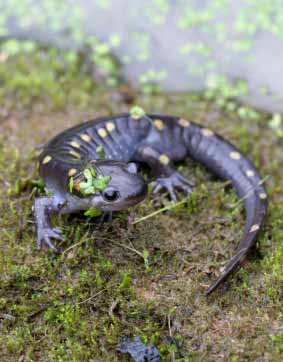 Spotted Salamander Emerging from a Pond
The Spotted Salamander has two bright-yellow rows of spots starting at its head and going down its back. Occasionally, they will have larger orange spots on the head, but this is less common. The overall body color can range from blue-black, to dark gray, to brown. They range in size from five-and-a-half to nine inches in length, although the average size tends to be closer to seven inches.

Spotted Salamanders should not be handled by humans, as their skin has a very sensitive, slimy coating which, when removed, can cause serious injury. They use their sticky tongues to catch food and eat a variety of insects, including beetles, snails, slugs, earthworms, and spiders. 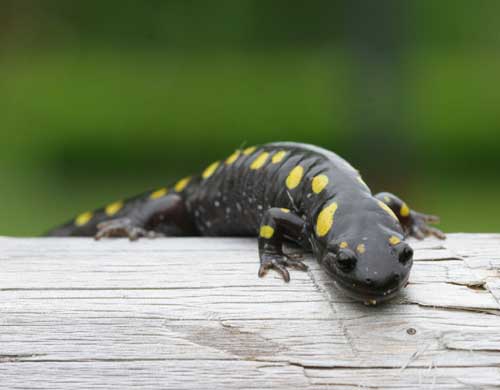 Cute L'il Spotted Salamander
Salamanders are amphibians – cold-blooded creatures capable of living on land and in water. Adult females lay eggs that hatch into aquatic larvae with gills. Eggs are laid underwater, averaging 125 eggs per mass. They take four to seven weeks to hatch and because they have not yet developed hind legs, resemble tadpoles. During the following 60 to 100 days, larvae grow legs and slowly transform into what we recognize as salamanders. They can live up to 30 years and may return to the same pond each year to lay their eggs.


More about the Spotted Salamander