This year, dozens of new classes of Marines will graduate from Parris Island, which serves as the training ground for all new female recruits, and all new male recruits east of the Mississippi. Over 17,000 Marines graduate each year after completing a 13-week boot camp with quite a reputation. They will be charged with protecting one of the greatest nations in the world, and their journey begins on the same soil where power struggles to shape our country took place.

Click here to read a fascinating and little-known account of why some scholars believe the Spanish may have been the first to arrive at Parris Island.

It was back in 1562 – decades before Roanoke or Jamestown – when a group of French Huguenots led by Jean Ribaut landed on our coast. By all accounts, Ribault (pronounced REE • BOW) was impressed with the land he saw. He established an outpost named Charlesfort, and left 26 or 27 men there while he sailed back to France, with the promise of returning with more people and supplies. However, his efforts were stymied once reaching France, and he wasn't able to return immediately.

Meanwhile, the men Ribaut left behind were encountering difficulties of their own. After depleting their food supplies and concluding Ribaut would not return, they mutinied against their commander. (We can't help but think that modern day Parris Island Marine recruits, just a stone's throw away, would sympathize!) They built their own boat and began an arduous trip back to France. 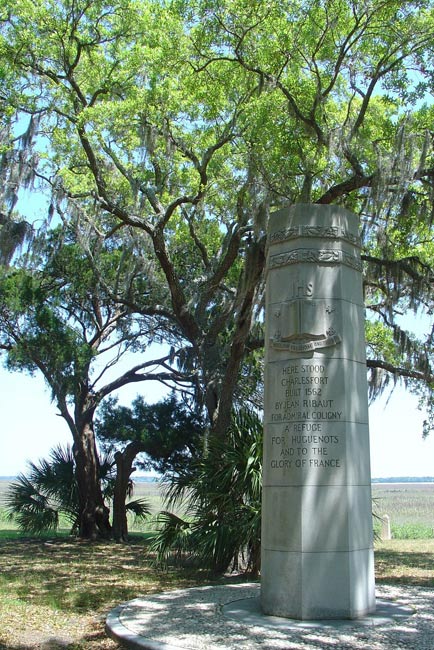 SCIWAY © Do Not Use Without Written Consent

The front of this monument reads, "Here stood Charlesfort, built 1562 by Jean Ribaut for Admiral Coligny, a refuge for Huguenots and to the glory of France." The monument was erected in 1925, after an archaeologist believed he had found the remains of Charlesfort. However, these remains were actually Spanish. In 1995, USC archaeologists discovered Charlesfort's true location nearby – under the remains of the Spanish Fort San Felipe!

By this time the Spanish had established a claim to land slightly south of this area. Upon hearing of the French plans, they set out to destroy the rival's potential settlement. They burned the remains of Charlesfort, and established a fort of their own – Fort San Felipe. Here they founded the new town of Santa Elena, which became the first capital of Spanish Florida. At one point, almost 200 settlers lived there, along with soldiers.

Like the French before them, the Spanish experienced difficulties. The Native Americans (who had already lived on the land for thousands of years) did not take kindly to this new settlement, and let their frustrations be known. Their attacks forced the Spanish to leave in 1576, but didn't keep them away. Led by a new commander, the Spanish returned the next year and quickly erected a new fort, Fort San Marcos. (The Indians had burned Fort San Felipe to discourage their return.)

Neither were the French ready to give up their land claim so easily, so the bloody contest for dominance continued. In the end they would all be bested by the British. The impending arrival of Sir Francis Drake forced the Spanish to abandon Santa Elena for good in 1587. When they left, they burned their fort so that it could not be used by the British or French.

For hundreds of years the exact locations of these early occupations remained a mystery. The Spaniards' extensive documentation of their expeditions made no reference to first displacing the French. This is presumably because they didn't want to acknowledge another country's claim to the land. An excavation in the 1970s uncovered what was left of Fort San Felipe and the settlement of Santa Elena. It wasn't until the mid-1990s that two archaeologists from USC finally discovered the exact location of Charlesfort ... right under San Felipe! 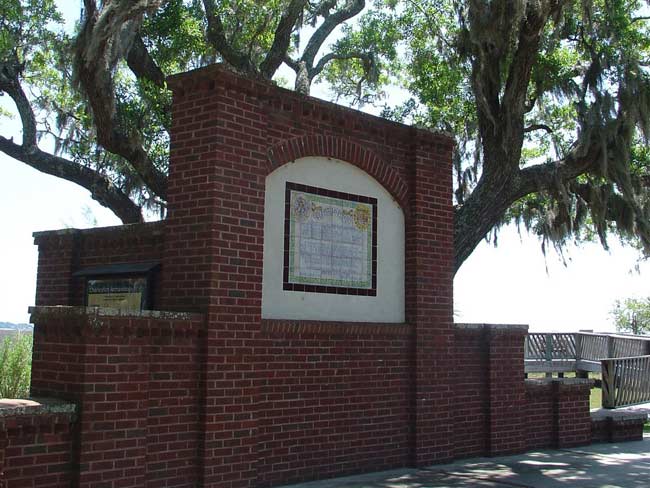 SCIWAY © Do Not Use Without Written Consent

This marker stands at the entrance of the site, and commemorates the town of Santa Elena – the first capital and the northernmost bastion of Spanish Florida. In both Spanish and English it reads, "In respectful tribute to the memory of those Spaniards who left their mark here between 1566 and 1587 while in quest of their country's glory and in grateful recognition to the distinguished Americans who today, with their work, pay homage to the memory of those heroes and the history shared by the two nations, Spain and the United States of America."

Ultimately, the British claimed the first permanent settlement in South Carolina. In 1670 British colonists set out with intentions of settling on Port Royal Island, but were convinced instead to settle sixty miles north. There, the founding of Charles Towne begins a more familiar segment of our state's history.

Today, the 60-acre site of these early settlements on present-day Parris Island have been declared a National Historic Site. This designation gives it more visibility and considerable protection. Visitors will find pristine walking trails that wind along riverbanks through the Charlesfort and Santa Elena site.

This trail, which includes a boardwalk, features signs chronicling important landmarks; the trail was designed to have no impact on the site's archaeological resources. Nearby, the Parris Island Museum houses artifacts from the site excavation. You may obtain a day pass at the gate by presenting your driver's license, vehicle registration, and proof of insurance. Entrance is free.

One final note: The whirlwind of activity we've described in this article is only part of the whole story. Parris Island played host to a high-stakes game of musical chairs for decades. Now, if only there had been a few thousand Marines around back then to hold down the fort!